While reviewing photos for the last post, Barbara Worth Perishes in Catastrophic Fire, I found a few archival photos at the California State Library which depict my hometown in its glory years.

The photo above shows the Barbara Worth as she looked in the old days. Car aficionados can probably date this photograph more precisely but the Ford Model A, as seen here, began production in 1928. The hotel opened in 1915.

The image below is the same view thirty years later. If you strain your eyes, you might see the Sears sign across the street. The Crest theater is on the other side of Sears. In the previous post, I noted that United Artists owned the movie house during the Golden Age of Hollywood when the studio premiered new releases in the Imperial Valley.

In 1926, Samuel Goldwyn made a movie based on Harold Bell Wright’s novel “The Winning of Barbara Worth” that starred Ronald Coleman and Vilma Banky. Wright dedicated the novel to his friend W.P. Holt, the pioneer who founded my hometown in the early 1900’s, and the man who financed the construction of the namesake hotel.

It was still the Old West when El Centro was founded. Main Street was a dirt road. Most people came into town on horseback or buckboard wagon. A few, however, could afford to come in style on a horseless carriage as seen below.

Notice the drugstore sign on the right. This location was always a pharmacy. In the next image (circa 1940), the same building housed Harner’s Drugstore and the El Centro Hotel. 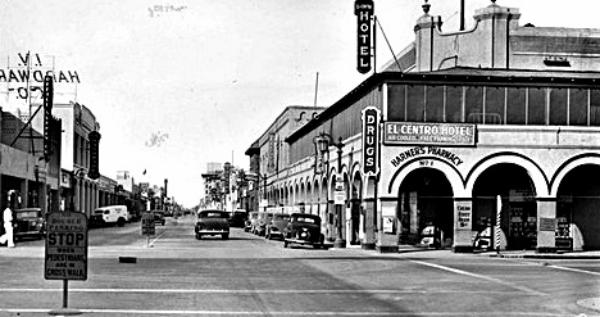 One block away was another corner drugstore, Clement’s Drugs. Notice that it’s air conditioned, and featured homemade ice cream — served, of course, at an old-fashioned soda counter.

These buildings have been demolished or vacated because they no longer meet earthquake standards.

The railroad was critical to the development of the Imperial Valley. Give credit to the persistence of W.P. Holt. Refrigerated rail cars transported the Valley’s produce across the country — spinach, potatoes, cauliflower, sweet corn, broccoli, onions, asparagus, watermelons, cantaloupes, and farm-raised fish. The region is essential to the nation’s food supply.

Burning Down the House

So much of downtown has been lost to earthquakes and fire. The structures are old and no longer pass more stringent building codes. Owners abandon their properties which are then possessed by squatters. Such was the case with the Hotel Mayan which burned down on February 14, 2021. 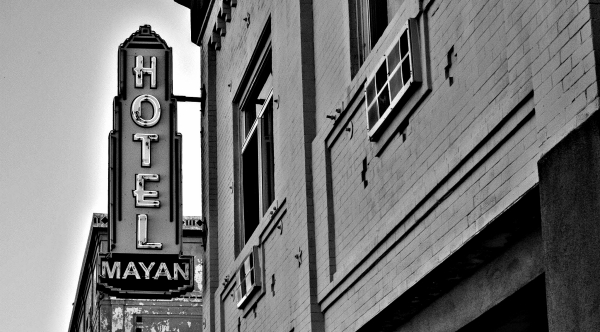 The local fire department responded to the first alarm but was not able to contain the fire. The first and second floors caved in just as firefighters exited the building. A second alarm was sent … and then a third. Seven fire departments from across the Valley, including the nearby Navy base, responded to pleas for assistance.

An investigation determined that the cause of the fire was arson.

One of the most gut-wrenching losses in recent times was the burning of the Brooks Jewelry building on February 11, 2019. 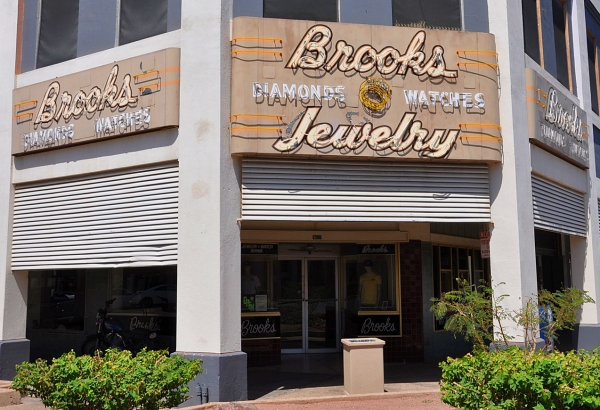 Again, fire crews from across the Valley, including the Navy base — and even the nearby State Prison — responded to the three-alarm fire. Brooks was the place to go for engagement rings, wedding rings or anniversary gifts. It served generations of Valley residents.

Sadly, it fell victim to arson. In the early morning hours on that fateful day, a person dressed in black was seen climbing a ladder to the second floor. They broke a window, tossed in an incendiary device and fled the scene on a bicycle.

The image below shows Brooks Jewelry across the street from Clement’s Drugs. Notice the KAMP sign atop the Brooks building. KAMP was a solar operated radio station with studios on the second floor. DJ’s would open the window and take requests from passing motorists — except at night when the station went off-air. On occasion, if there was strong solar activity, the station could be heard for about thirty minutes after sunset. 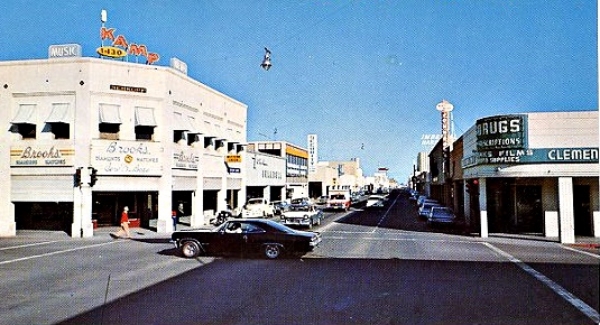 Legend of the Hotel California

El Centro is rich with local folklore. Tales of our hometown being the birthplace of Cher are snappishly denied by the entertainer who is famously ashamed of our humble neck of the woods. Still, birth records show that she was born here on May 20, 1946.

I mentioned last time that the Hollywood crowd would attend movie premieres then stay the night at the Barbara Worth Hotel before heading across the border to Mexicali where they could legally gamble and drink. Back in the day, you might spot Marilyn Monroe or John Wayne passing through.

The Hotel California, seen below, is the subject of a story that may or may not be true. It is said that the inspiration for the Eagles hit song, Hotel California, was this very hotel located in the desert community of El Centro, California.

The story goes that one or more of the band members were passing through the desert on the way to Mexico, and decided to stop for the night at the hotel. The lyrics might give us a clue as to whether this may be true.

On a dark desert highway, cool wind in my hair
Warm smell of colitas, rising up through the air
Up ahead in the distance, I saw a shimmering light
My head grew heavy and my sight grew dim
I had to stop for the night

There she stood in the doorway;
I heard the mission bell
And I was thinking to myself,
‘This could be Heaven or this could be Hell’
Then she lit up a candle and she showed me the way
There were voices down the corridor,
I thought I heard them say …

The hotel was built in the California Mission style, including a mission bell that welcomed visitors and alerted travelers far and wide. Don Henley, in a 2017 interview with National Public Radio, insisted that the song was not about a specific place.

Though the hotel, like so many of the town’s historic buildings, no longer stands, it is the romantic in me to think that the story is true — even if for a night.

Copyright © In Pics and Words

4 thoughts on “Archival Photos and the Legend of Hotel California”